Five sculptural reliefs by artists who belong to a homeless collective now greet visitors at the entrance of the Te Manawa building at Eden Terrace, Auckland.

HOMELESS artists living on the streets of Auckland have found a unique place to showcase their creative talents – inside one of the buildings used by the country’s biggest transport infrastructure project.

One of Awhina Mai Tatou Katoa’s artists, Teare Turetahi, says he and his three fellow artists are “honoured and humbled to use their art and be part of CRL”.

Their sculptural reliefs are to be used as visual learning aids incorporating painting and traditional carving patterns.

Te Manawa is a place of learning and the reliefs will be used to share mātauranga – traditional knowledge and education – with those who view them. 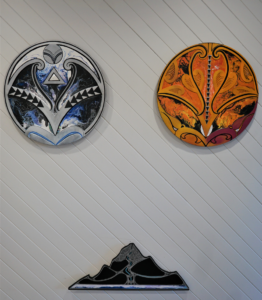 “The project will have a huge impact on Auckland’s future, but the Awhina Mai Tatou Katoa artists remind us that it’s equally important not to lose sight of the past and the themes and narratives important to Tāmaki Makaurau. Their works rightly sit at Te Manawa where people come to learn and to share.”

The City Rail Link is planned to open in late 2024, providing more frequent and quicker rail services into central Auckland.