Construction has started on the next phase of City Rail Link’s Aotea Station in central Auckland after the recent overnight closure of the intersection at Victoria Street/Albert Street.

Work has begun on the next phase of construction progress for City Rail Link’s Aotea Station in central Auckland after the recent overnight closure of the Victoria Street/Albert Street intersection.

The first priority is to survey and cut open the intersection’s surface to find the many utilities essential to keep the city running buried there and then relocate them away from the station’s footprint.

Fence lines erected to keep the work site safe include wayfinding and business signage and artwork to support the neighbouring community.

“The quicker we start and finish is a benefit for everyone,” said Matt Sinclair, Aotea project manager for CRL contractor, the Link Alliance.

“We have a challenging task and it may include a surprise or two.  During our earlier closure of the Albert Street/Wellesley Street intersection a block away we discovered that not everything underground was where we expected it to be.” 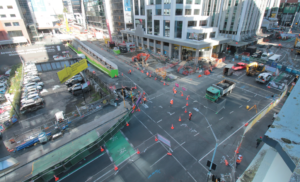 Underground utilities that need to be relocated include a steel gas pipe that feeds most of the city centre as well as a network of pipes and cables that carry power, fresh water and storm water, and telecommunication services.

When services have been relocated work will start on construction of what will become New Zealand’s busiest railway station serving a revitalised city centre.

The Victoria Street/Albert Street intersection is closed only to through traffic and remains open to people on foot to access cafes and restaurants, and other businesses in the area. 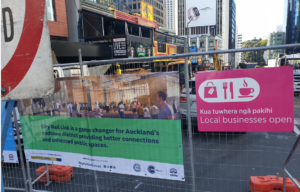 Alongside work at the intersection, the Link Alliance is delivering a comprehensive programme to support the project’s small business neighbours.

“Disruption from the project of this size in the middle of a city can’t be avoided, but we’ll be working very hard to make sure it’s ‘business as usual’ around us,” Sinclair said.