How the internet is allowing companies to make better decisions about rail assets.

THE future is now when it comes to rotating equipment performance in rail. The IMx-Rail concept, developed by SKF, helps rail operators in detecting issues with their vital equipment by alerting in advance the potential issues so that an expensive unplanned downtime can be prevented.

IMx-Rail is a cost-efficient, multichannel condition monitoring system that can be integrated into an existing system in a wide range of railway applications.

IMx-Rail can collect various forms of data such as speed, vibration, temperature and rail track shocks and analyse them to give operators reliable information.

“The concept is agnostic – it can take digital inputs but also analogue inputs from the other existing process sensors.

“It can be integrated to the existing Train Control Monitoring Systems (TCMS) of rail operators and can work with cloud technology. Cloud to cloud integration through APIs make this device a versatile service for the railway operators as parameters from their assets can be utilised in customer’s railway platforms.

“It is a versatile piece of equipment to monitor the health of equipment and help prevent unplanned breakdowns, issues that can cause issues for operators that can be very expensive,” he said.

IMx-Rail, according to Jain, helps put the operator in a commanding position, with data from the equipment used to draw out actionable insights to improve train performance and reliability.

The evolution of IMx

According to Jain, the concept of IMX-Rail had its genesis in customers seeking more information from their assets.

It improves the reliability, availability and performance of rotating equipment in rollingstock with automatic advice for correcting existing or impending conditions.

But it also can be used to define and potentially extend maintenance intervals.

“Frequently we heard stories from customers that when they dismounted bearings during their standard maintenance operations they observed that these bearings seemed like they could have run for longer,” Jain said.

“But once you have dismounted the bearing, it is too late, you have to either go for a refurbishment or replacement.

“So, customers wanted to take informed decisions on whether they can run those bearings for a little longer.”

IMx-Rail has all the international rail certifications required to run in the environment below the bogie or on the rail car.

“Originally the SKF concept was for large machines and equipment at mines and that was where it was first set up,” he said.

“From there it has been developed for environments such as rail.”

Herbert said IMx-Rail had proven itself throughout Europe and was now establishing in Australia.

“The approvals and customer interest are not an issue,” Herbert said.

“We recently had success with an operator in New South Wales and the feedback we’ve been getting has been exceptional.

“All the time, the level of interest is growing. We are now going to include shock detection on the track which is currently being implemented.” 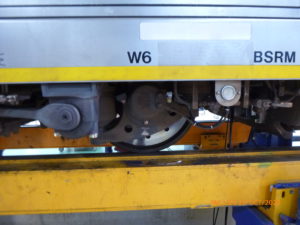 An important part of the IMx-Rail concept is utilising the expertise of engineers within the SKF remote diagnostic centres (RDCs) around the world.

“We have such RDCs pretty much around the world, from Hamburg in Germany to even here in Australia,” Herbert said.

“It is a considerable benefit to both our business and our customers.”

Frank Lucacevic is a specialist rail engineer who has had the chance to see and work with the IMx-Rail concept up close.

“What I think is particularly relevant about IMx is that it offers an all-in-one package.

“It is a system that comes complete; it comes with the data logger, it comes with the sensors. I think of it being like a play system; you take the system and you don’t have to figure out too hard how to integrate it into a piece of rollingstock,” Lucacevic said.

“It integrates very easily and the benefit is that it is constantly communicating; you are getting constant updates and constant feedback about what the sensors are reading about the condition of the train.”

Lucacevic said the dashboard component was intuitive and easy to use, even for those with limited technical knowledge.

“It could be an analyst who is looking for alerts and they can just identify a ‘significant’ alert or a minor ‘watch and act’; the observer doesn’t have to interpret the data themselves, they just have to tell the person who handles that sort of equipment.”

Nigel Herbert believes IMx-Rail is an evolving concept and has been refined by listening to customers and hearing what they want.

“All has been developed with the customer and what they have needed,” he said.

“It is going to develop continuously where current systems can be upgraded and future software improvements deployed; it is not just going to stop where it is now,” Herbert concluded.

The post IMx-Rail and bringing out the best in bearings in Railway Assets appeared first on Rail Express.